When I was in the hospital with nephritis, I shared the room with five
other girl patients. Except for a very small or very sick child, parents
weren’t permitted to stay overnight with the patients. They came during
the visiting hours. I was nine years old and had never stayed outside
home such a long time before. I suffered from homesickness rather than
from nephritis. My parents were too busy working seven days a week as
farmers and only my mother visited me everyday. But she only made it
less than one hour before the visiting hour ended although I was waiting
for her all day long. No matter how desperately I begged her to come
earlier, she prioritized her work and I got to see her merely forty
minutes or so a day. Sometimes my father also came to see me, taking my
younger sister with him. In that case, when the visiting hour was over, I
would see my parents and my sister off. They went into the elevator
together and the door shut before me, excluding me alone. That was the
thickest door I’d ever felt it was. I went back to my bed and lay down
hiding tears from other girls and nurses. Maybe it hinted my future
relationship with my family. The three of them still live together in
our old house that I left after I struggled and couldn’t quite fit in… 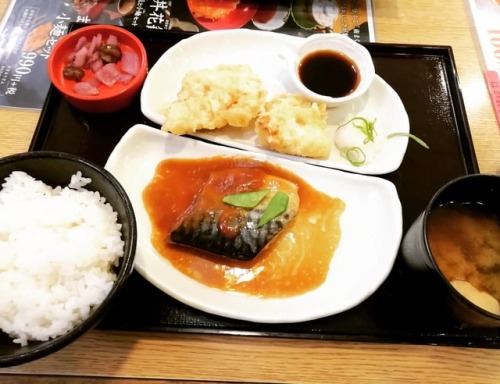 Having a daily #lunch special at a family #restaurant. Today’s special is broiled #fish with miso and #karaage – fried #chicken in a Chinese style. $8 including rice, miso soup, pickles. #Japan
https://www.instagram.com/p/Bz5-RLcAgSX/?igshid=6eegnhowjkys

This time in my fourth grade, I was in the hospital. It started as
cold-like symptoms with a high fever. But I was left unattended because
summer was the peak season for farming and my parents were extremely
busy as farmers. To make things worse, my family had been rebuilding our
house at the time and extra attention of my parents was paid to that. A
week or so later, I vomited blood and fainted. That at last captured my
parents’ attention and they realized the seriousness. When I became
conscious, they had called a nurse who lived in the neighborhood and she
was attending me. She suggested taking me to a hospital. After
examination, I was diagnosed with nephritis. As the summer break for
school was just around the corner, I was admitted to the hospital on the
day the break began. Although I had been longing for the summer break
as the precious time of my freedom, I was locked up in the hospital
instead… 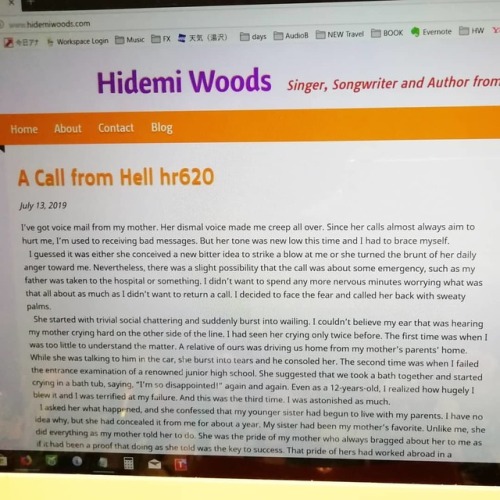 My sister won the first prize of a local poem contest for elementary
school students. Her poem appeared in the local paper and many people
read it. The title was ‘My Mean Big Sister’. Back then, every time she
saw my face, her habit was to say ‘Play with me!’ As I liked to spend
time alone, it had been an endless torment. Her continuous play-with-me
chant would often drive me crazy and I tried to escape from her as much
as I could. Her poem described how coldly I snubbed her whenever she
felt happy to see me at home, and that was highly praised. To
congratulate her, I told her that she owed me for this prize because if I
had been nice to her, her poem wouldn’t have existed, and added that my
meanness proved right and so I would try harder. Needless to say, she
got on the verge of crying and ran straight to my mother as usual to
tell on me…

The most troublesome homework for the summer break in elementary school
was a picture diary. It was a big blank book in which you would draw and
write about what happened each day, along with the day’s weather.
Because I held off on my entire homework as a lazy student, the last day
of the break would become a shambles involving my parents every year.
While I was doing other pieces of homework sobbing from regret and their
rebuke, they were tackling the picture diary by forging happenings and
making sentences. But the thing was the required daily weather. There
wasn’t the Internet yet at the time and the weather record of the past
40 days depended on my father’s memory. My mother drew pictures and I
wrote down the stories my parents told me. My picture diary was
evidently written by a grown-up with peculiarly well-drawn pictures and
mature sentences. Of course, the total amount of homework was too huge
to be done in one day even by three people, and I would submit only part
of it on the first day of the second term. When asked by the teacher
for the rest of it, my excuse was always ‘I’ve done it, but somehow, I
forgot to bring it.’ The first couple of days of the second term would
be spent likewise. Although my parents made me promise that it would
never happen again, I repeated it every summer break…

I had a dream about my sister last night. In each and every dream about
her, she takes my parents away from me. She’s four years younger than I
am and I still remember the time when she was born. Although everybody
told me that I must have been very happy to become a big sister, I felt
gloomy more and more as my mother’s due date was drawing near. I
strongly wished my sister would never be born because I knew grown-ups’
attention would leave me. And I was right. She was born to be my
parents’ favorite. My mother especially stood by her all the time, both
physically and mentally. I was sent away to my grandparents’ room to
sleep with them. My mother’s arms and lap were always occupied by my
sister and I was constantly driven away to my father. Only consolation
for me was my grandfather’s attitude. Because Japan was excessively
male-dominated –it still is, in my opinion-, he was bitterly
disappointed that his newly born grandchild was a girl again. He kept
complaining about it to his neighbor friends, saying ‘It’s no good! A
girl again! No good!’ For that matter, he had six grandchildren in all
and none of them was a boy. I regard it as a curse. My sister still gets
along well with my parents as their favorite, lives with them in my
hometown, and they brag about whatever she does while they criticize for
whatever I do. To this day, they remain taken away from me by my
sister. It can be a good thing for me, though…

The herons built their home and settled in across my apartment. I see them hanging around like this everyday out of my window. #heron #bird #trees #Japan https://t.co/u8wuLqlZ8d